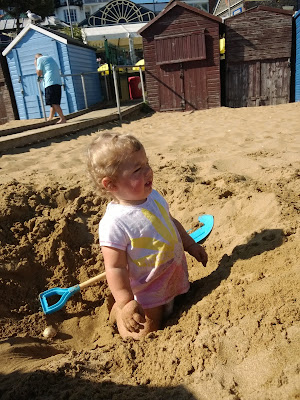 Before Pants went back to school we wanted to do something fun before the reading books come and the homework starts and soon we have forgotten about the summer and soon thinking about the winter. after much decision Pants decided he wanted to go to an arcades to spend some change he had saved. Im not a lover of arcades but he wanted to go so I thought why not. So of we went to Broadstairs so we could go to the beach and to a few parks also. 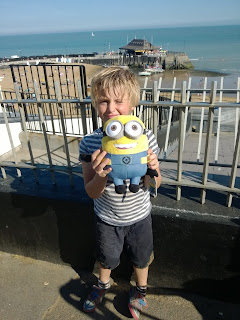 So off we went on the train the kids excited, Pants was having fun talking about how to escape the train if there was a fire! I was happy to be outside in the sunshine, I cant stand to be indoors on such a lovely day. I thought i would get it over with so we went to the arcades first and after some unsuccesful attempts on trying to win a toy on the grabbing machines, and winning a little toy on the 2p machines we went to the beach. The beach has become a little bit of a pain with Ami lately she just wants to explore and Pants wants me to help him dig a hole! It is a lot of effort with a baby who just wants to find some stairs and climb. We then walked into Broadstairs passing the arcades so I said why not try one more time, me on the peppa pig machine Pants trying to win a minion. I looked round and he finally won one! I made his day we have spend far to much money trying to win a silly teddy! So of we went looking round the shops in Broadstairs, we even came across a playmobil castle in a charity shop and made a note to go back but forgot and then it was closed. 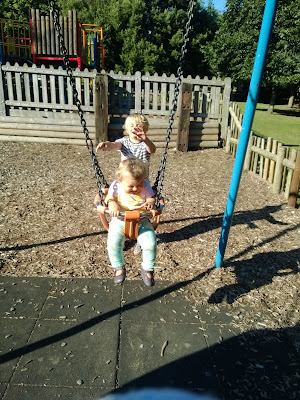 We then went to a play park were of Pants went to play lego batman with whoever wanted to play with him, and me and Ami played (well I say play stopping Ami jumping off the apparatus and injuring her self!). She now can climb a ladder and get herself down the slide. Then she decided to get more daring and try things that were far to difficult which resulted in her running and jumping of a high part of the apparatus! scary but she didn't hurt her self and wanted to do it again. she doesn't have any fear. We then went to another park whilst waiting for a train where a dog went under the pushchair and took pants minion toy and ran round the park. The dog owners were so embarrassed as they tried to get it back (I found it rather funny). Was a lovely day with me and my little monkeys Im sad the holidays are over it went by far to fast.

Posted by Mummys little blog at 10:07

Email ThisBlogThis!Share to TwitterShare to FacebookShare to Pinterest
Labels: days out, holiday, summer