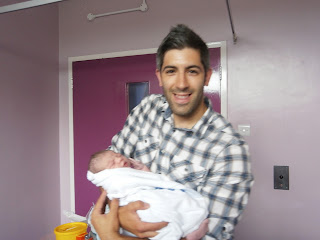 When its your second pregnancy everything is familiar you think you forgot what its like to have a huge bump but soon everything comes back and your comparing the size compared to the last time. So when it came to the end i expected labour to come the same as it did before in fact i expected it to be alot earlier! but there i was a week overdue the same as i was with Pants still pregnant! 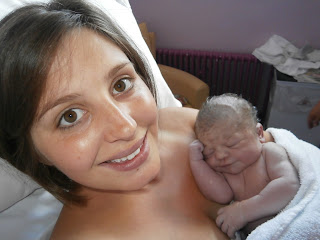 My husband had some men's breakfast he went of to so i thought nothing of it! I then realised when he had gone I had started to get pains across my stomach and back. Here we go i thought Ive plenty of time it took 24 hours with Pants so i watch some TV get Pants sorted to go to my sisters bit somehow things were going a bit quicker! suddenly it was becoming unmanageable. So i called my husband who was fixing some TV and told him he better hurry to take me to our local hospital! I heard from people he was with that he wasn't in any rush and wanted to finish the job he started and that they had to push him out the door! So after dropping pants of we get to the hospital and there is some kind of fete on in the maternity car park! so we park on the roads outside the hospital bonus as didn't have to pay for parking! 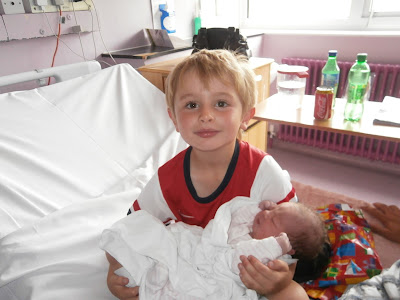 So i walk down the ally stopping a few times and we finally reach labour ward! memory's come back and i had also done a maternity placement in that ward so i knew how things worked and where things were! it was a shame as the midwifery led unit was not open as i would have fancied a water birth but maybe next time lol! The time was 11:30am and the midwife checked me over and said i was 3-4cm i thought great got hours to go yet! so i plod along with gas and air time flying by! my husband doing a good job of stroking my hair! I don't remember the midwife coming in alot i remember her putting a monitor on as she said the babies heart rate had dropped! then she came in again to say she was going on her break! so a new midwife came in she did a check and found out i was fully dilated and could push anytime she just needed to break my waters! i was in so much shock the time was only 1:30pm. so she breaks my waters and out pops Ami with little effort! i was so pleased and surprised! It was a completely different feeling from my first i didn't have that sense of responsibility as i did with Pants! i was in love! my husband did such a good job and he was over the moon! He was asking when we could leave thinking we could go straight away! we then got moved to the ward where my sister had brought Pants! we had got him an Arsenal kit he was excited and put it on straight away! he was unsure of this little baby who is now his sister! he held her for a little bit then was ready to go! My husband asked if we could go and they said we cold when they had done the paperwork! it was 5:30pm and we left the hospital now a family of 4 after a round trip of 6 hours life changed yet again! 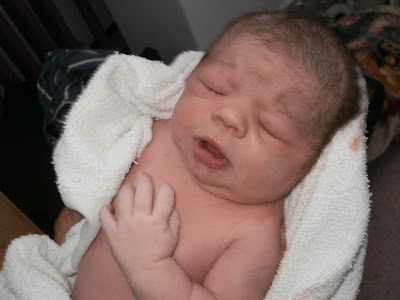 I love to hear from you so please comment! And if you If you like this blog then don't forget to subscribe to my blog so you never miss an update. .......}
Posted by Mummys little blog at 09:17