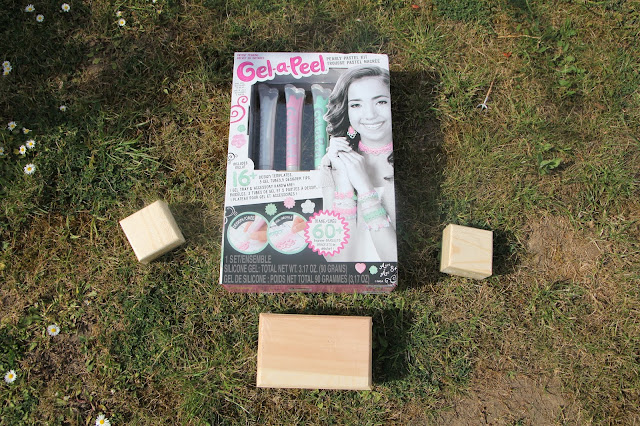 If you had seen some of our previous posts you would know we are quite the fans of Gel-A-Peel. If you have not heard of it before then its well worth looking into especially if you have a child who is particularly crafty. The Set we were sent came with three different colours and a verity of different nozzles also mould to create different shapes. 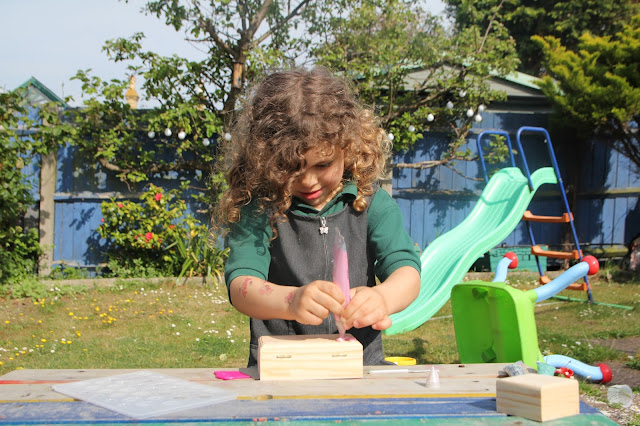 You may be wondering what Gel-A-Peel is? Its different couloured gels that can be manipulated into shapes via the use of moulds or even going freehand with a design. It then dries into a rubber texture. The Gel sets come in a verity of colours and sets which include glitter and neon colours. 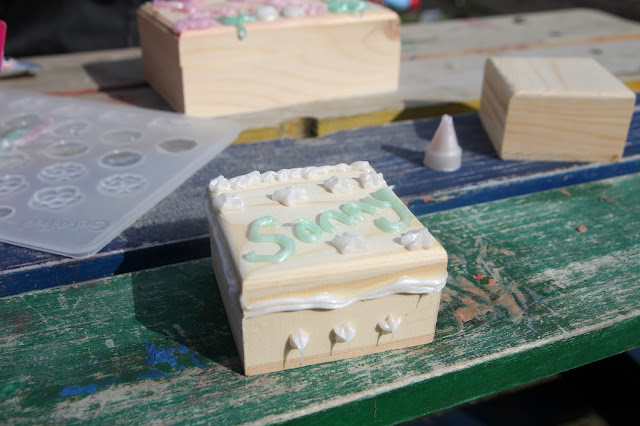 There is so much you can do with Gel-A-Peel from creating jewellery itself to designing embellishments for little boxes. For Ami she loved using the Gel to create different designs. I like the way it adds a 3D texture to the finished product. We also used the left over Gel to stick on the dried gel pieces to the box too. The set comes with a range of templates where you can creat some bracelets too. 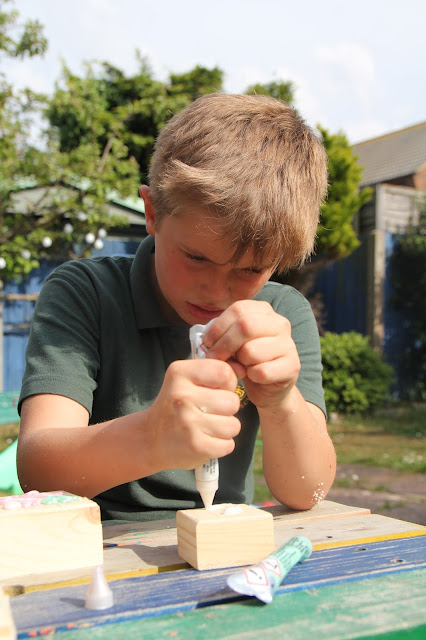 The Gel takes a few hours to fully dry so we found it was best making the moulds the night before and sticking on the next day. Although Ami is nearly 5 she can be inpatient at times. Asti also got involved and had quite a bit of fun making a little box. He mainly liked trying the different nozzles like he was decorating a cup cake. For us I found creating a design on something like a box the best thing we have done with the sets. The finished product is different to a normal painted box and adds a different touch. 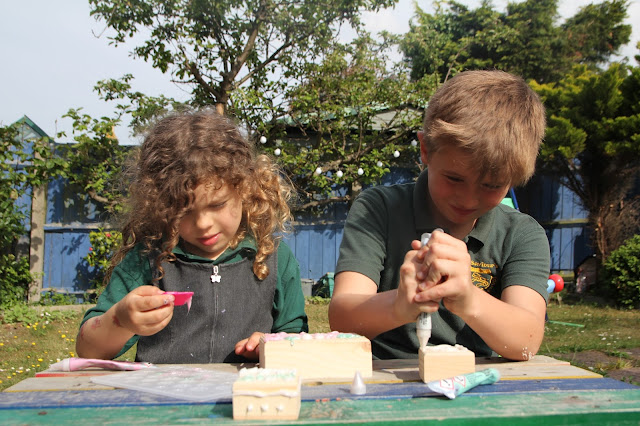 This set retails at £19.99 and is perfect for crafting onto cards. I say the results came out much better than I originally thought. Why mot get  Gel-A-Peel set and have a go yourself. 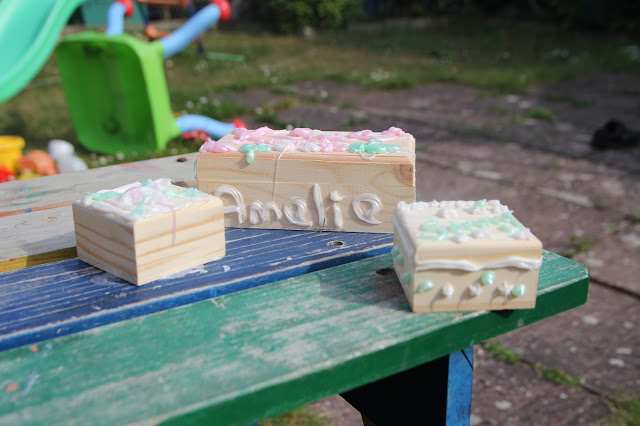 Posted by Mummys little blog at 22:51 No comments: 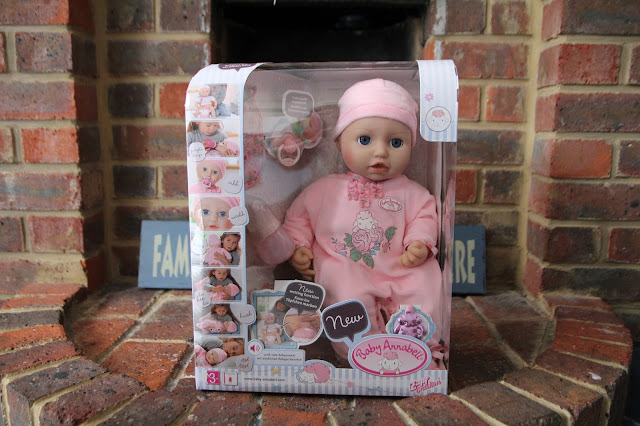 My youngest two are baby doll mad even Son Son who is always playing the dad in him and Amis little games! It's the one game they play the most from waking I can here Son Son say I be the dad.. Although there are often a lot of arguments over who takes the baby to nursery and feed it. Thankfully we were sent a new little baby to try out meet their new Baby Annabell. Ami was rabid mainly because her best friend has a baby Annabell too and they would be just the same. 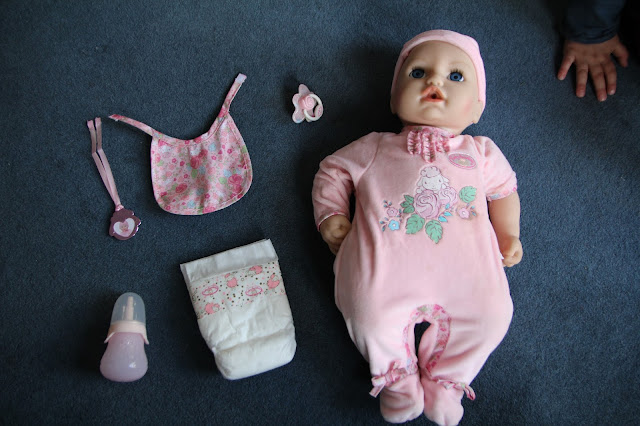 We have lots of baby dolls in our house I think maybe near the twenty mark over the years but none quite like Baby Annabell from Zapf Creation she is brilliant. She requires batteries (that are not supplied) and is fully interactive. Ami and sonny were over the moon.  She comes complete with some lovely little accessories and is wearing a really lovely outfit. Ami loves a baby doll that is the same size as a real baby. Annabell is also heavy so it feels like the real deal. 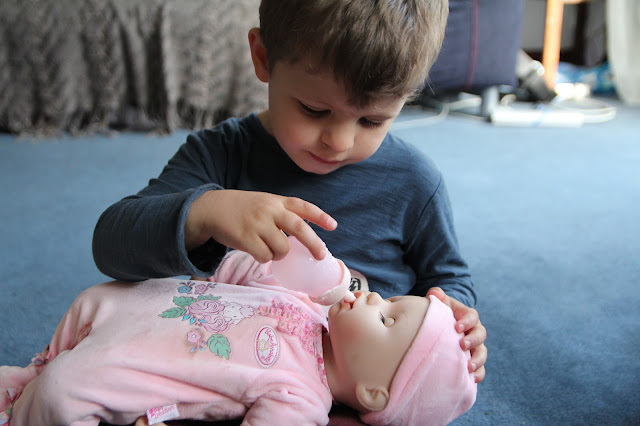 So what  actually does Baby Annabell do? She does everything. She gurgles and laughs when you cuddle her, slurps on her bottle which can be used with water (she also wee's if you sit her on the potty and press her tummy much to son son's delight ) she also burps to let you know when she is all done. She sucks on her dummy and her little mouth actually moves like a real baby it’s so clever! You can wind her and rub her back to make her burp. 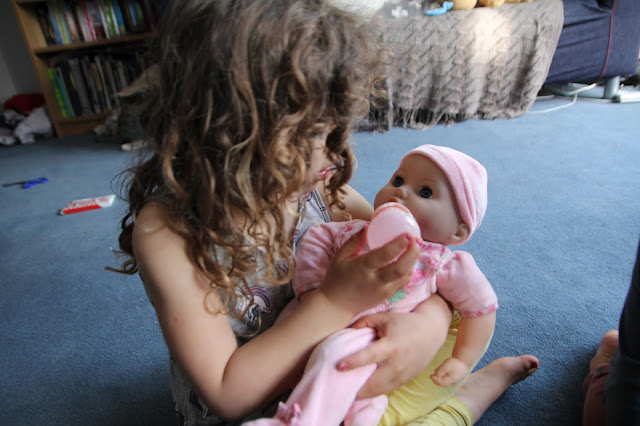 But it’s not all fun and games, rather like a real baby she sure does cry and even has real tears. It's all very life like I've found my self burping Annabell and thinking what am I doing! Annabell comes with a nappy too which Ami loved she changed the baby about ten times in a row. 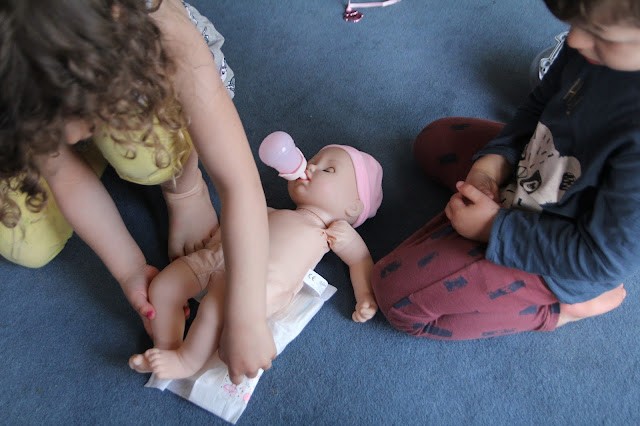 Baby Annabell was a huge hit with both of my little girls they absolutely love her. Priced at £49.99 she might not be the cheapest of Dolls but is worth it. Annabell is such good quality to she will be around for many years.  Obviously we have had interactive dolls before but I don’t think that we have had one that does quite as much or looks quite as realistic. She really does look and feel like a real baby. Except the smelly nappies which I am not to disappointed to be honest. 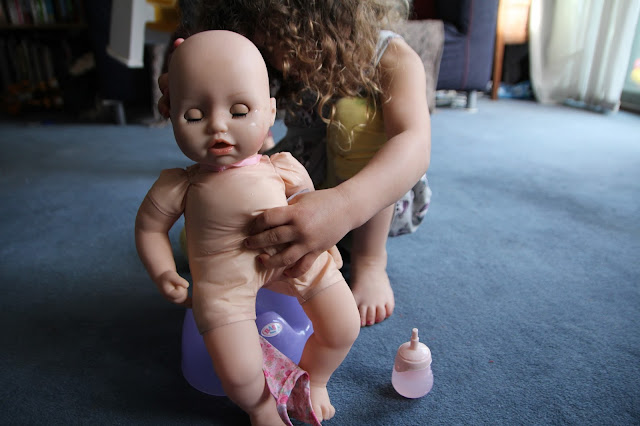 Ami and Son Son have loved Annabell and still do. They play with her all the time taking it in turns to feed her then put her on the potty. Ami now wants more Annabell toys for her birthday were getting quite the collection. My neighbour actually said to my Son "what you playing with a baby for?" and Son Son said I love to play with babies.

Heres some more photos of Ami and Son Son playing with Annabell they love her so much. 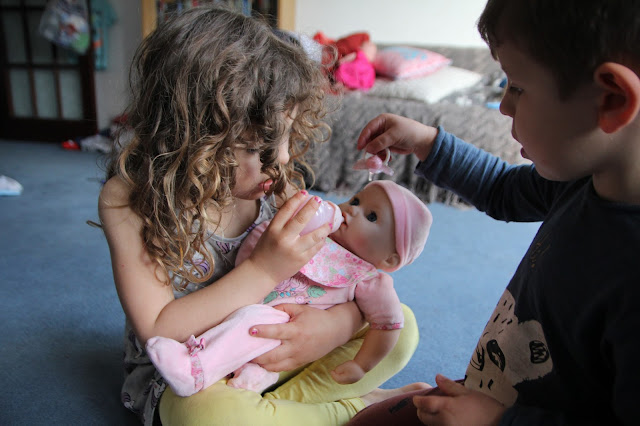 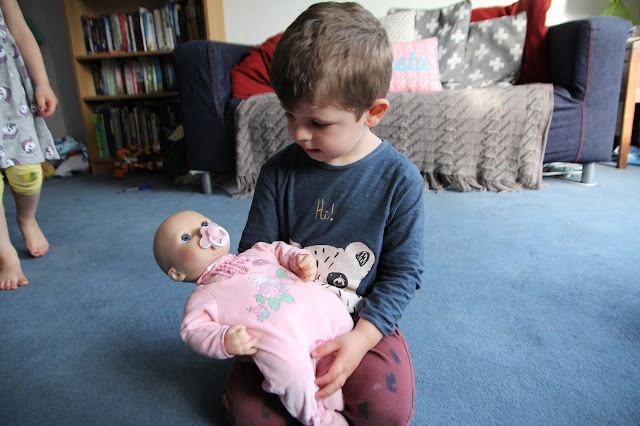 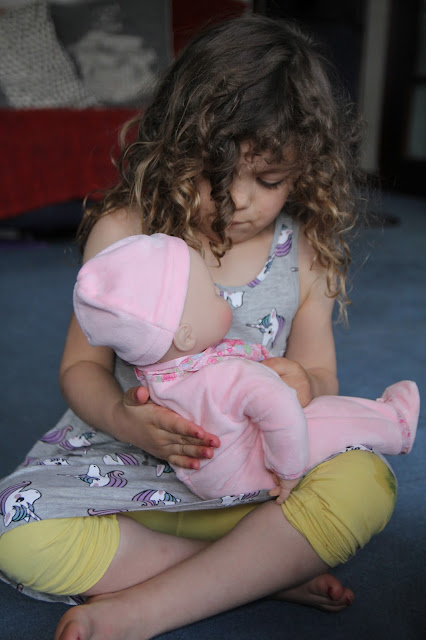 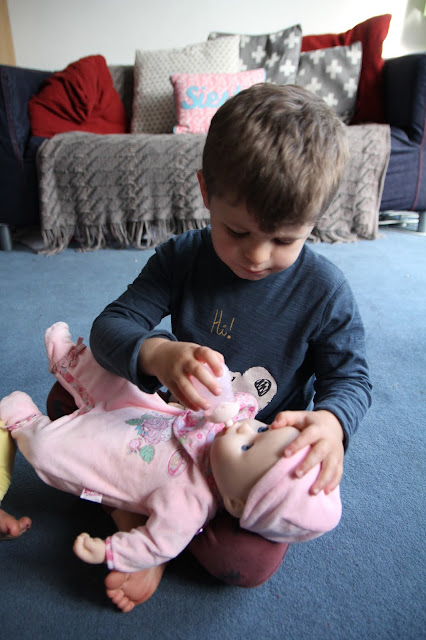 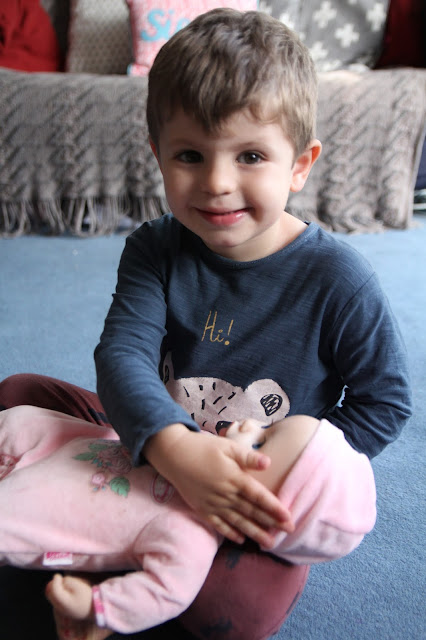 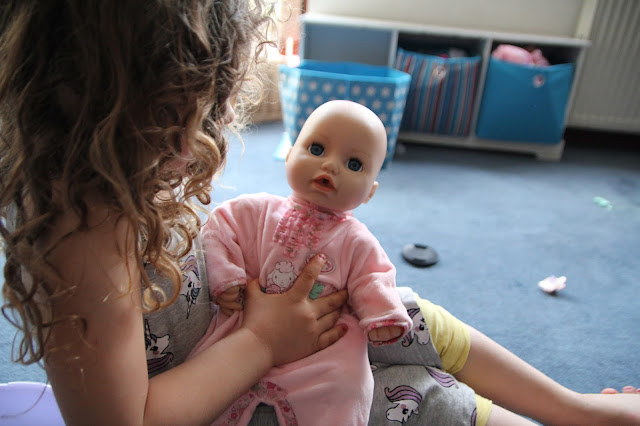 Life as we know it

Its been a long time since I have sat with a laptop on my lap the main reason   excuse being that my laptop  charger broke on my mac so it currently runs on 1%.  It makes it hard work when your computer keeps on turning off. Theres one thing I have realised though I have missed typing away at my laptop. Its something I have been doing for the last four years and something I love to do. I think being dyspraxic it can be hard to express but I feel like I can get my thoughts down out of my head. I am not always the best communicator when it comes to face to face (just ask my husband). Just thought I do a little post to keep everyone or the one reader who is left following my little blog. 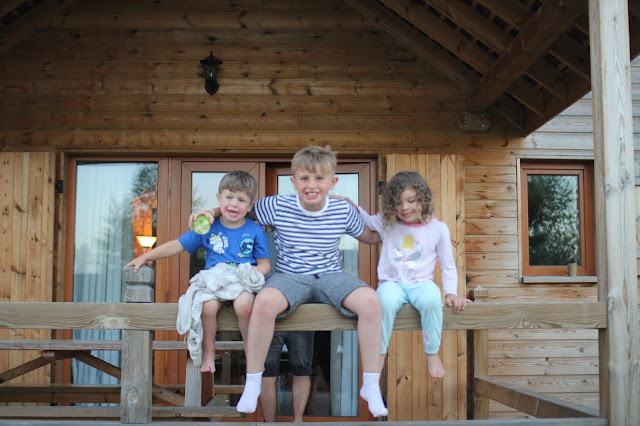 So our life as we know it is about to change both me and my husband have new jobs!! which is completely mental. I am just getting over the shock that childcare arrangements and all that jazz will be a bit different for a few weeks whilst we work out how to juggle life. To be honest with my husband being self employed its been easy for him to work round my shifts as a nurse. We kind of go into the realm of the unknown for the upcoming weeks. My husband has got a job as a media manager for a charity and me as a special care baby nurse. Both for us new roles. Mine has taken a long time due to 500 checks to move departments in the same hospital its a bit of a joke really. So next month its all change. Its good change I have to remind myself that. 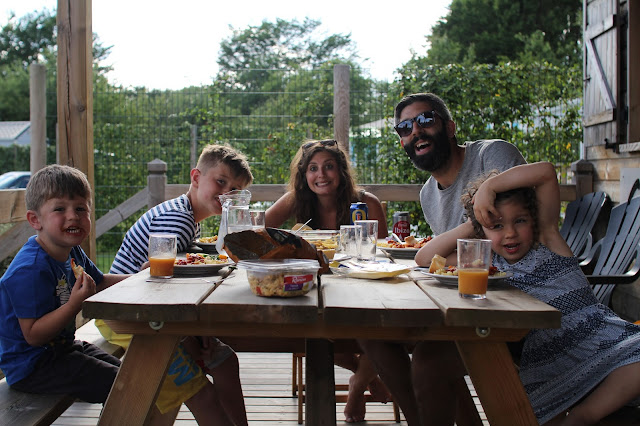 10 year olds they are a fun kettle of fish arnt they? I know when I said the toddlers were hard work least i can pick them up and distract them but tweens are hard work. My Asti is nearly 11 and is going through a stage where the world is against him. It can be trying at times especially when you can ee the good. He's a good lad but has some behavioural problems ADHD is a potential he's currently getting tested for. Its taken along time and lots of tears to get the school to get him assessed. Its super hard work at times especially when you see your child make bad choices but you want to sort it out for them. Its not all doom and gloom Asti has been doing really well in Maths and has read 6 harry potter books. I think is a great achievement for a 10 year old especially as some of the books are long. He's a proper Harry Potter fan now though won't stop going on about it. 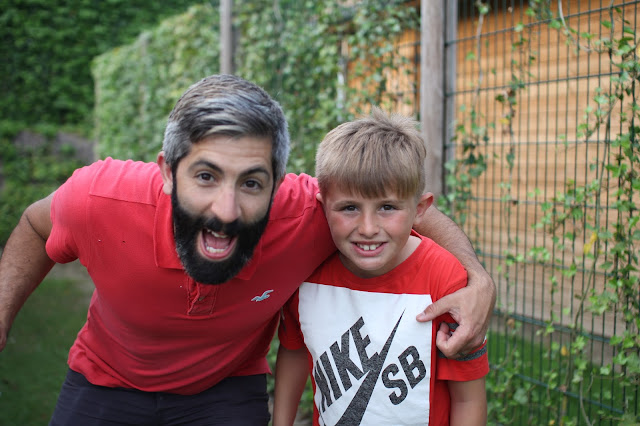 Ami has nearly finsished her first year at school I can't quite believe it the year has flown by. She's breezed through the first year with out trouble. Still the has a wild feisty spirt to her but we have seen a caring side to her whilst being at school. Although she comes out like a feral monster the neat plaits from the morning come out like a lion mane at the end of the day. She's getting there with her reading and she has finally started to write which can be cute. She doesnt always want to start writing which can be discouraging but I know she will get there. She's not yet 5 although dont we know it. Shes a good girl though she loves babies and playing mums and dads. 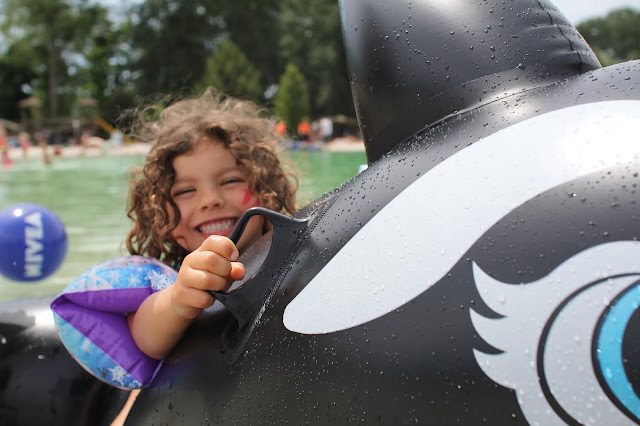 Son Son is doing well he has a speech and language appointment coming up but his speech is getting better each day. We find Ami talks a lot for him any way and corrects him when he says something wrong recently. Him and Ami are quite the duo act at the moment always ganging up on us parents or there older brother. They play all the time together which can be cute or they can fight which is not cue at all. He's rather cute though being 3 and the baby he is very much loves cuddles and being treated like the baby. We are loving school though the days when its just us two and everyone else is at school and work. Its so easy to look after one child although I have to remember that because he is easy not to just do housework as he easily plays on his own.
\ 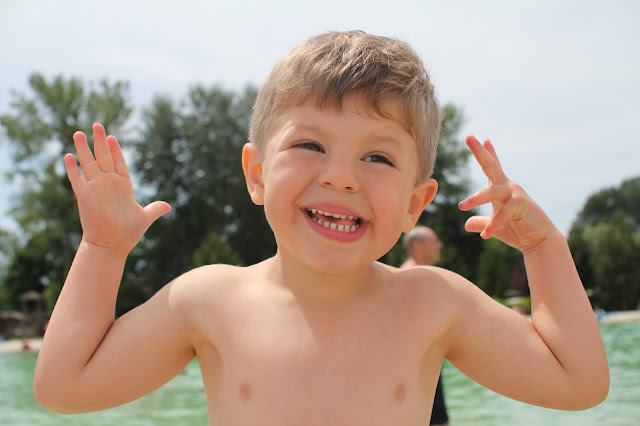 So there we have a little update on us and life. We have just got back from our holiday and also camping. Its all going on were in the super busy season of life. Im a bit riding it out but also close to the edge. I am someone who suffers with depression it can easily work its way in and I must not be fearful of change. I myself have wanted a new job for a long time as has my husband. I bet in a few months I will look back and wander what I was even thinking.

Life is good we are so so blessed.

Posted by Mummys little blog at 22:11 No comments: