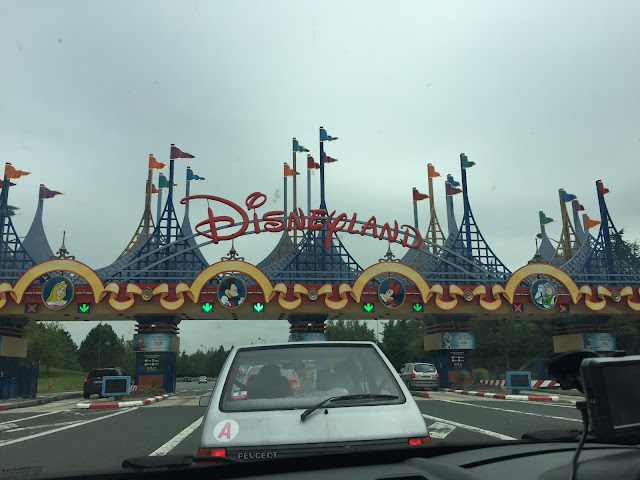 Ok I realised that its been nearly six months since we went to Disneyland and I didn't even write about it. What was I thinking? Well I think because I wrote so many holiday posts I held it of until I was in a writing loll, kind of what I am in now. Wondering what to write about next as we don't do much other than work/ nursery/ soft plays areas, life sure does get fun in the winter... I think its because I am an outdoors person, also because I do not drive and live in the middle of nowhere transport wise its hard to get anywhere. Anyway less of me drifting of to a random story, we actually went to Disneyland. 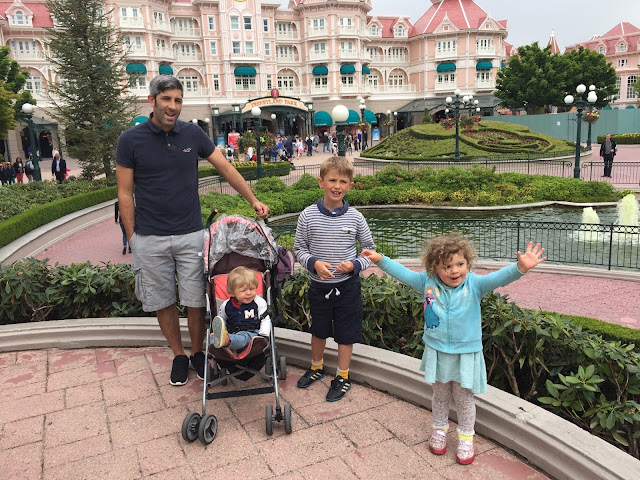 It all happened whilst we were on Our Eurocamp holiday back in June (hangs head in shame in forgetting  to write about it). It was the reason we chose to stay at the resort as it was only an hour away which would make it perfect for a quick day trip. We have been to Disneyland twice before for just a day but not as a family of five. We wondered how the little ones would be would they enjoy it? would it be stressful? Is it a waste of money? All these questions went through our minds and we went for it any way. 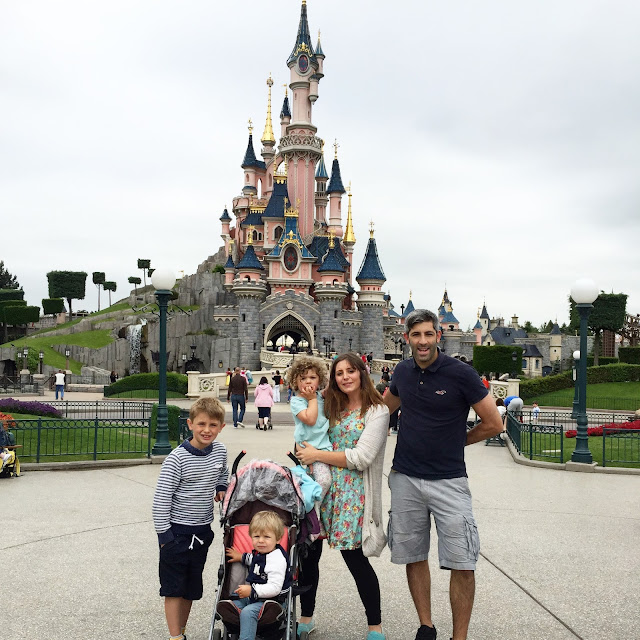 We surprised the children saying we were going to a French Castle to explore, Ami was over the moon and couldn't wait whereas Asti was feigning being ill. Asking to go back to the holiday resort. As we got nearer that illness disappeared and he was suddenly back to normal. Ami's face was a picture of pure excitement as she started to notice the familiar Disney signs all around. 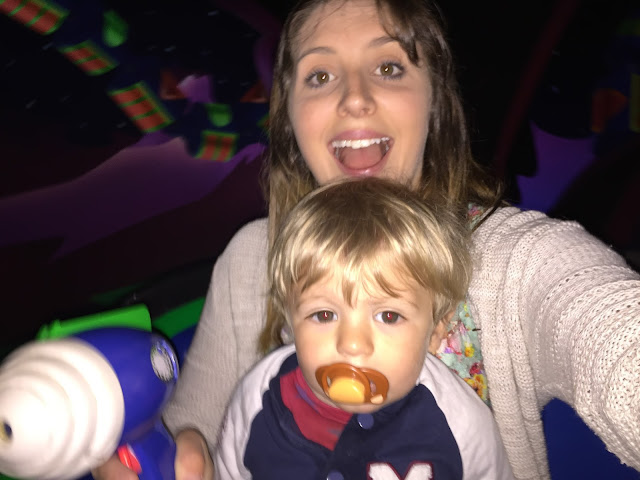 We had the single pushchair which worked well meaning we could keep Son son in one place and Ami and Asti were good at walking with us. Although this did have its downfall during the fireworks when Ami fell asleep on my shoulders. My eldest wanted to go on the buzz light year ride first and with baby swap ( if you haven't heard of it before it's where you can get a ticket then redeem it to go on again with the other parent, one of the best things about Disneyland with a baby). They loved the buzz ride we went on it a total of 4 times. Wet hen split up where my husband got the best deal with Asti whilst I tackled some of the smaller rides such as Its a small world like 6000 times, they sure did love that ride. 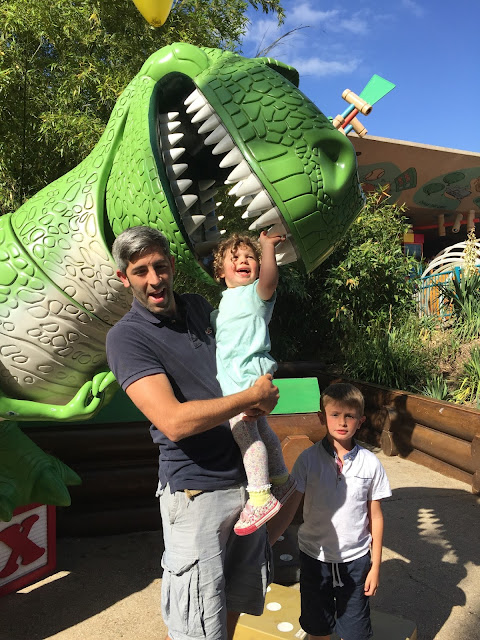 We also went and watched a Disney Junior show, which all three children loved especially as things fell from the ceiling and bubbles, it gave us a got 20 mins to sit down and recharge for a bit. Once again we split and Asti and Daddy went on some of the more scary rides, whilst I did nappy and toilet runs. Mainly our excuse to look round the shops (Which there are so many). It was then time for the parade which is one of the best bits about Disneyland. We found a good place and by then it was rather Sunny and warm. 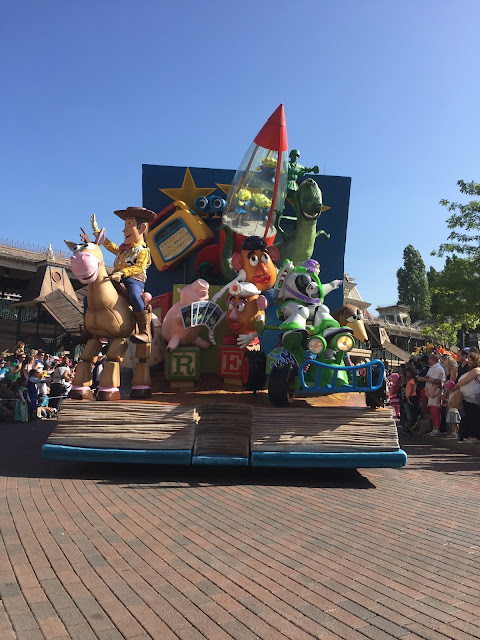 The parade was awesome and all the children sat and watched in amazement, which is surprising for two toddlers and a hyperactive child. Ami was so excited to see the Princess's and there was a massive roar for Elsa on her ice float. Asti received a lot of high fives which he loved. It was great fun and we had the theme tune of the parade stuck in our heads for the rest of the day. 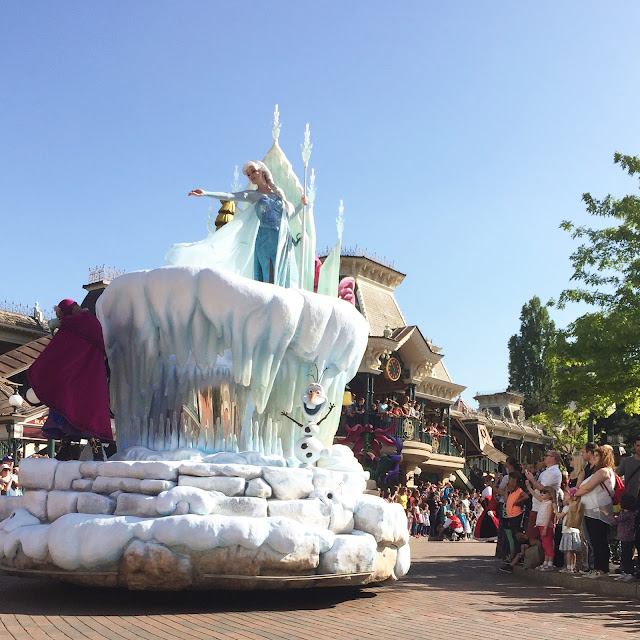 We then pottered round a few more rides, went back to its a small world again just so Daddy and Asti could endure it again. Ami loved the tea cups although her face doesn't show it. We didn't see many characters walking around unlike the last few times and when we did they had a mass of people around them. We didn't realise that a lot of places close early and we only brought enough food for lunch, thankfully we found a place that was just closing and had a quick dinner, as expected it was going to be expensive as everything in Disneyland is. We also missed the time for the sing along Frozen songs much to Asti's delight. 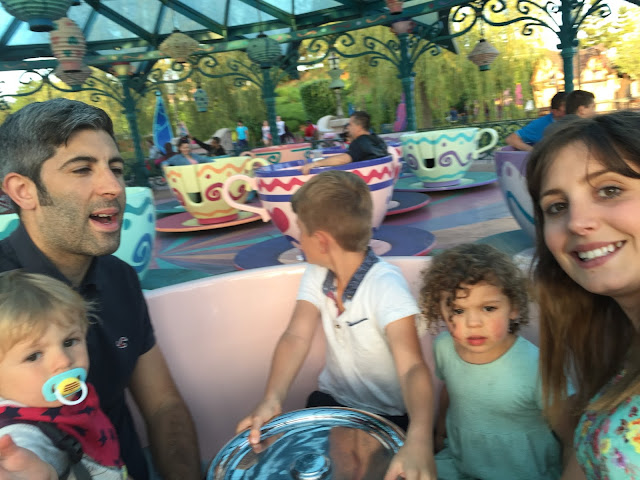 It was slowly getting dark and we decided to hold on for the fireworks at 11pm. Poor Ami had spent the day walking around the park was actually still going. We went back to the buzz ride and looked round the shops again, Ami got an Frozen toy and Asti got other bits for his friends. We stopped of for hot chocolate and by this time Son Son was fast asleep in the pushchair. 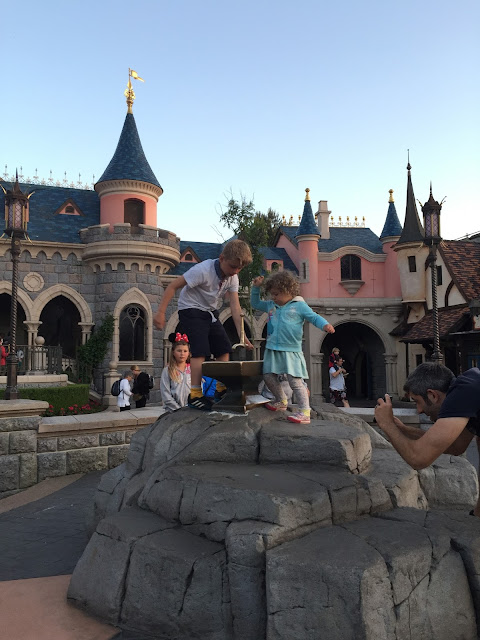 Looking back now we should have taken Ami's princess dress as all the girls were wearing them, I didn't think maybe because the last two times I had been had been in the winter so everyone was wearing there coats. Ami did ask for a dress but they were extortionate prices and were mean parents. Son Son on the other hand had tried to pinch a few teddies the little monkey and had become attached to a lots so hugging bear which we let him have. 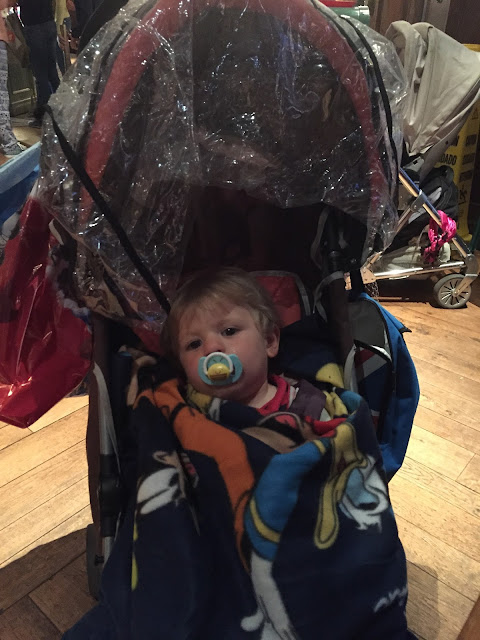 By the time the fireworks started everyone was shattered but we all looked forward to the fireworks. We found a good place then it got full up sadly Asti could not see much so Daddy had to hold him up.  I had Ami on my shoulders and Son Son was asleep. I have to say they were some of the best fireworks I have ever seen. The way they went with the light show and music was something so spectacular. Halfway through I felt Ami become very heavy and she had fallen asleep so then I had to carry her. We left the park around 12pm after a long walk back to the car, we should have got one of those Disney buggies but we didn't think at the time. 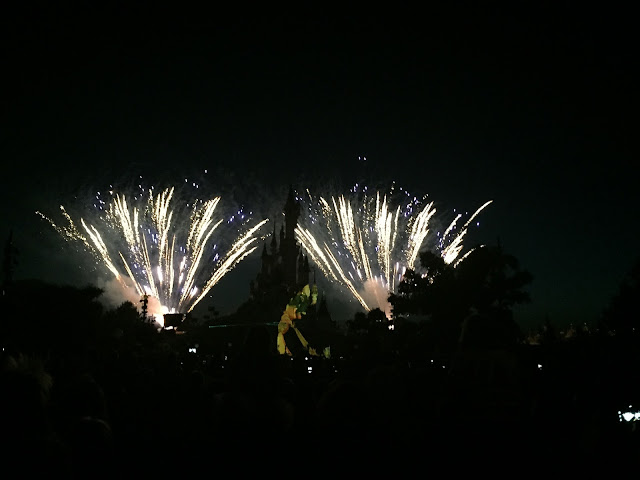 It was the most fabulous day, a rather expensive day that took most of our holiday budget but was totally worth it to see the children's faces. Maybe one time we will go to Disneyland for longer than a day but not sure our bank balances would recover. The children were such superstars all day and it defiantly made the trip. Was a highlight of our holiday and the kids were exhausted the next day. Ami still got up at 6am the next day though.
Posted by Mummys little blog at 08:45