So its been six months since Amelie arrived and became a mum of two, its funny after your fisrt baby life changes so much! i was young when i had Aston so i had to grow up very quickly! but with Amelie life has just got busier! we said before she was born that we would try and live life the same as before and just because we had two children didn't mean we would have to stay at home and not get involved with anything! along came Amelie a week late! the midwife had been round the day before but said she couldnt do a sweep as had to be 7 days late! i was devastated i had had enough of being pregnant and as the weather was the only hot days of the year i was desperate not to be huge anymore. we were away orrinagnally serving at a community event in Sidcup called lark in the park!

Amelie when she was born

so the saturday morning came and my husband had gone to a meeting when i felt the first few pains of labour come on! i had a bath and they were getting stronger so called the husband who was fixing a tv and was in no hurry the contractions were to much to bear so he came quick and we droped Aston of at my sisters! At the hospital there was a fair on so no parking we had to park on the outer road which was good as saved on the car park! so we got there at 11:30 got checked over and the midwife said i was 4cm dilated! so then they gave me the gas and air and the rest gets blurry i tried loads of positions but sitting lying back was most comfortable  i remember trying to stand but the pain was awful i think i was ready to push earlier looking back! our midwife popped in said she was going on her break so another midwife came in and check me over. by this time i was looking at myself but trying to get control. the midwife said i was fully dilated and could push! i was so surprised as Aston labor was really long! the midwife broke my waters and at 1:30pm out Amelie came with one push! i was still in shock and happy! we were home 4 hours later people didn't believe we were in and out of hospital within 6 hours!

So six months and Amelie is such a cute girl, shes chilled out like her dad and very happy!
Astons been such a good big brother even helping some nappy changes! although Aston had a wasted summer with Amelie being born, we did complete Lego batman 2 i could use the play station controller whilst Amelie feed! its amazing to be a mum of two! my husband cant wait for the next one! 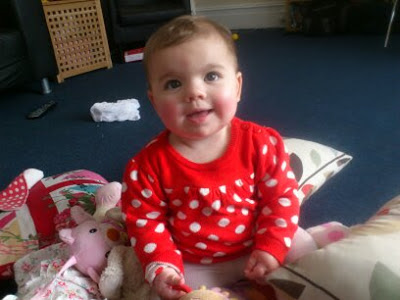 Posted by Mummys little blog at 17:44