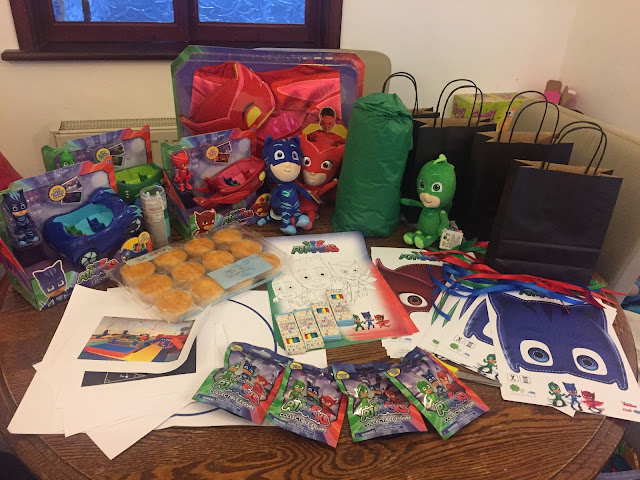 I don't know if you took part but last week we were part of the PJ Masks Twitter party? Well we were very privileged to be sent a box full of activities and toys for the children to try. I am not going to lie it was a lot of fun. The Twitter party had lots of comepetitions and little games to play too. My little ones got to play pass the parcel, make a PJ mask and so much more.

The party was in aid of the new PJ Mask toys that were realsed last month, they include a variety of role play, plastic adventure sets and cuddle plush toys. The range is colourful and exciting and more is going to be added later on through the year its rather exciting.

Ami was sent the wonderful Owlette costume too which she loves. Omelette you may be wondering who I am talking about but Owlette is one of the three superhero's that make the PJ mask team. The Costume is avalible to but and the RRP is £24.99 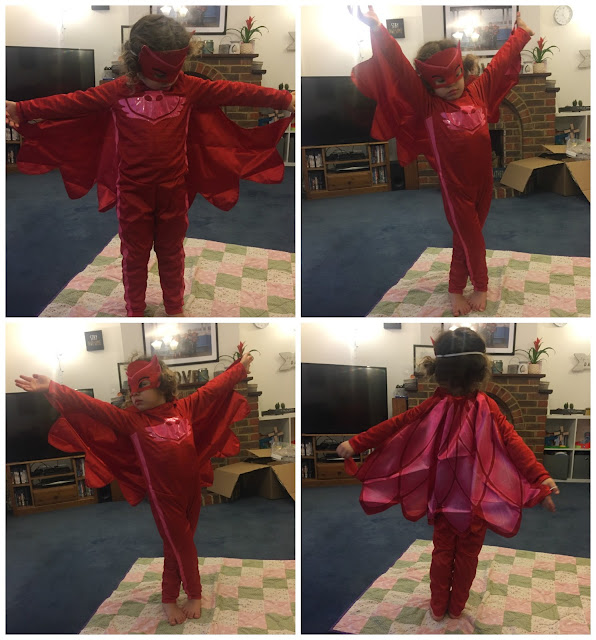 Our first task was to make a PJ mask we were given all the equipment to take part and colourful ribbon to attach it together. My children love arts and crafts so this was right up there street. Son Son went with Cat Boy as did Asti. Ami obviously went with Owlette, I made a Geeko mask so they didn't feel too left out. 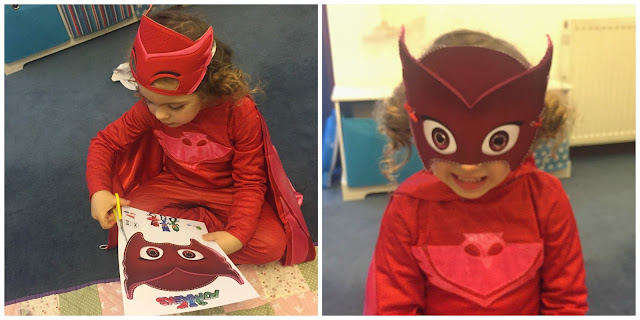 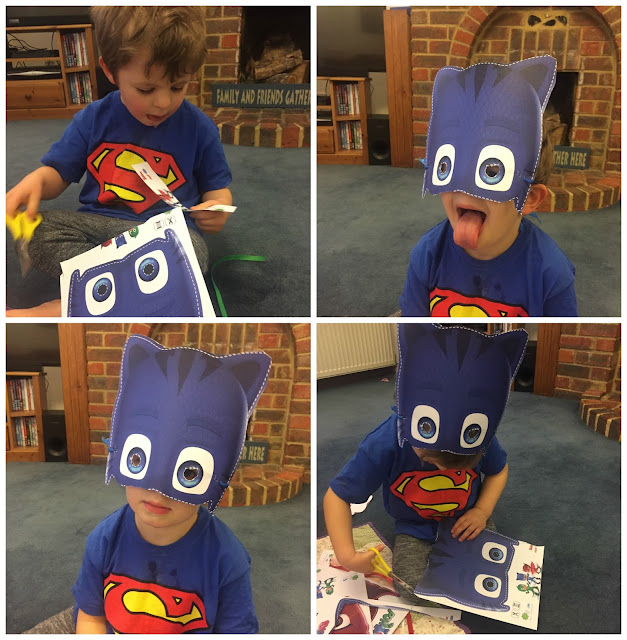 Match the Item with the Character Game

Our next game was match the character with items. We had a bag full of superhero qualities and the children had to guess which quality went with which superhero's. It was a lot of fun and required the children to work together as a team. Especially as Asti was the only one who could read of the sheets.
The plush teddies involved in the game retail in the shops at £8.99 each.

It was then time for a bit of peace and quiet whilst the children sat and colour some PJ Masks pictures. They all did a fantastic job and it gave me a chance to sit and have five mins to make a cuppa whilst sorting the next few activities.

We added this to our party and the children had great joy decorating PJ masks cakes. All in all as you can see below the clear winner was Asti in the middle photo and his fab PJ Mask's cakes.

Who doesn't love a bit of Pass the Parcel especially on a school night. They had a lot of fun the three of them taking it in turns (sometimes crying when it was someone else turn). There was plenty of layers and the toys inside included the new PJ mask's Figures. 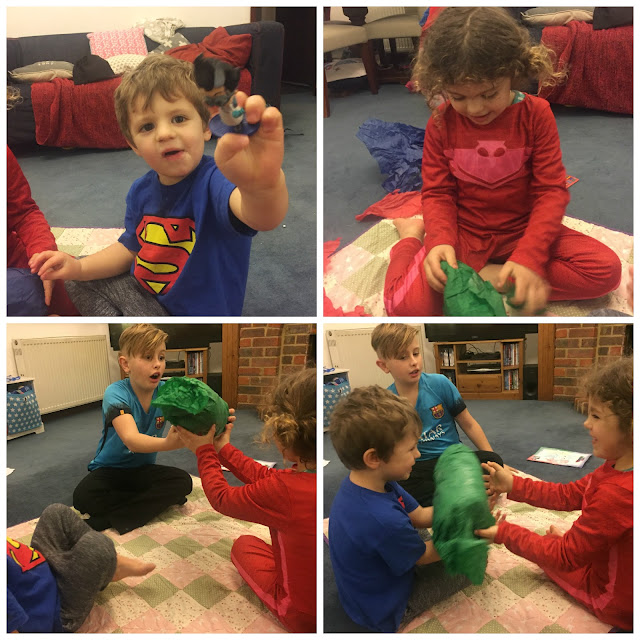 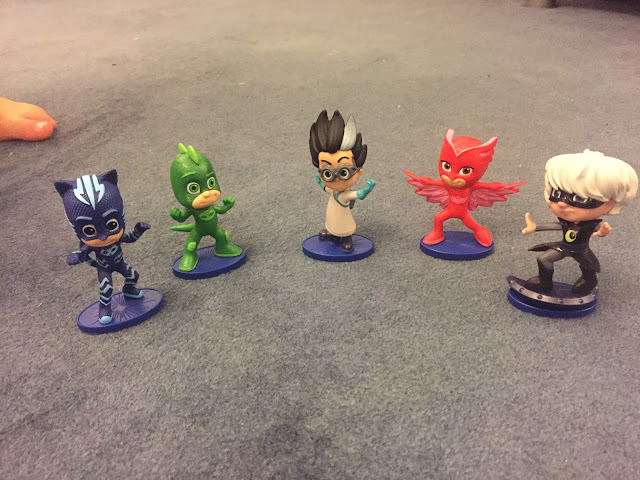 Free Play with the PJ Masks

Our last activity was to try out the new range of PJ mask Vehicles all contain one character and they all can fit in each others cars too. The toys are bright and true to the TV show too. The figures can be moved to sit down and provide the chance for children to use there imagination whilst playing.  Son Son's Favourite was Cat boy as you can see from the photos he was rather fond of it and did not let his siblings play with it at first. Son Son had been watching it on the TV as he knew all the characters names and even the bad guys we were all surprised. 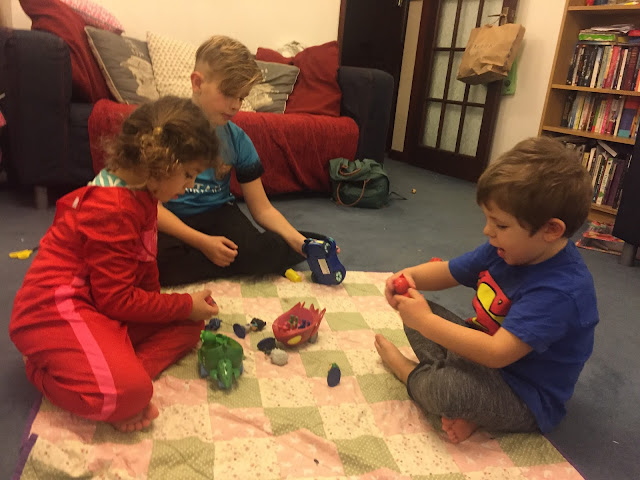 We were sent three sets of the cars and characters which retail at £12.99 each. They are great fun for any PJ Mask fan! 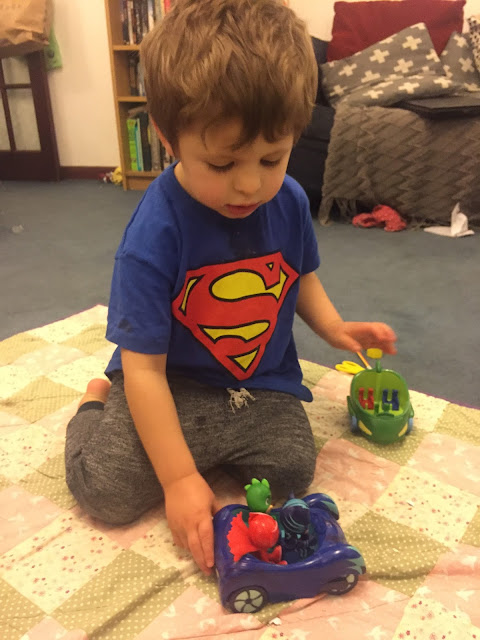 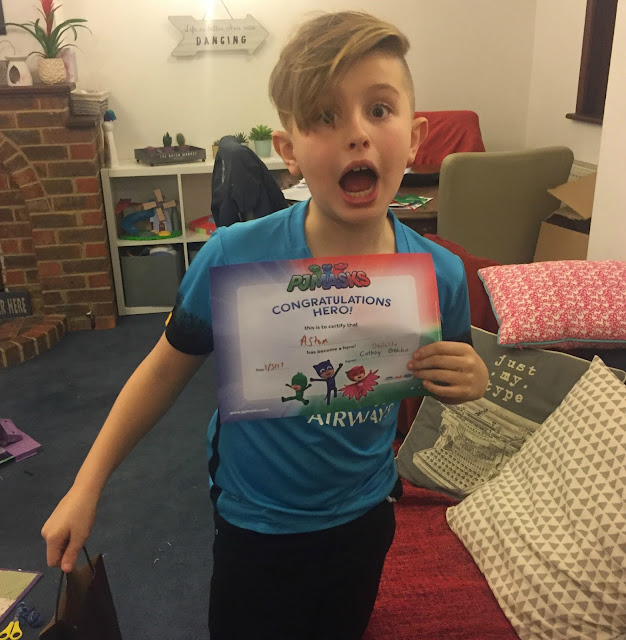 We had a great party with PJ masks Even my eldest Asti who is 10 got his award for being a good boy during the event. Be sure to check out the full range available in toy shops now.  We were also sent some Blind bags which were in the goody bags and the children loved them. Son Son especially as he got 3 Catboys!!

Be sure to check out UKMums.tv for more PJ Masks information, activity ideas and downloads.

Posted by Mummys little blog at 10:06